The 2009 Wall of Fame inductees were Tom Webb and Ewart Hone. The inductees were honoured on October 23rd, 2009 following the Fall Supper. Their photos and citations are on permanent display at the Pangman Community Center. 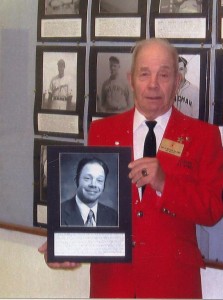 As a young boy, Tom had always wanted to skate and play hockey, but as the times were hard, work on the farm was the priority. It all started when Belt Vogeli approached Tom about coaching a hockey team in Pangman, which he did for the next 11 years. The addition to the hockey rink was built during the time that Tom was president of the Pangman Rec. Club, and he sponsored the “Webb’s Comets”. He tried to instill in the boys a dedication to the sport and loyalty to the team. In 1976 he offered to buy the Weyburn Red Wings, and was involved as owner for the next 11 years. “Promoting hockey promotes business in the community,” said Tom Webb in an interview for the Weyburn Review in 1981. The thrill of a lifetime came in 1984 when the Weyburn Red Wings captured the Centennial Cup, the National Championship of Junior A hockey. In 1995 Tom was inducted into the Saskatchewan Sports Hall of Fame in Regina. Over the years he has continued to run a prosperous farming operation. Having served as a Wheat Pool delegate for District 2 and as president of the Pangman Co-op, he is currently a director of Red Coat Road & Rail, a Councillor for the R.M. of Norton, and a member of the Pangman & District Economic Development Board. 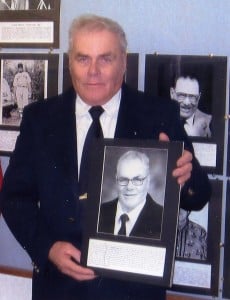 “When I see something that needs doing, I like to get it done or try to find someone to help me get it done.”. These are the words and philosophy of EWART HONE who has lived in Pangman since 1992 after retiring from farming. He is Pangman’s most dedicated volunteer who willingly gets involved in countless activities and functions in our community. On any given summer day, Ewart can be seen watering the flowers at the highway and in town or cutting grass at the gazebo park or checking the boilers at the swimming pool or trimming trees with Jack or preparing for the weekly Farmers Market. When he manages to get away for a few days fishing, the invariable question arises, “When is Ewart coming back?”. Through volunteerism, Ewart has made many friends as he greets young and old with a cheery smile usually followed by some good-natured quip. At a ceremony in Creelman in 2004, Ewart received the regional “Volunteer of the Year” Award from the South East Saskatchewan Association for Culture, Recreation and Sport under the recommendation of the Pangman Recreation Board. The award was in recognition of his many years of dedicated service as a volunteer at the Pangman Recreation Centre. Ewart’s generosity of time and spirit has earned him a well-deserved place of honour on Pangman’s Wall of Fame.

There were articles on the Wall of Fame in The Weyburn Review and in the Radville Star.