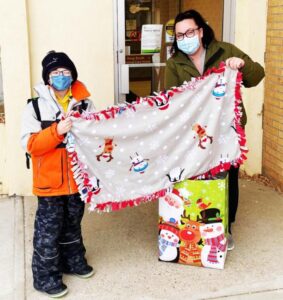 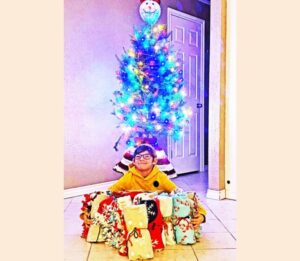 Auric Pingert believes “everybody deserves to feel happy at Christmas time,” so with this in mind, he embarked on a project to make and donate lap blankets for every resident of the Deep South Personal Care Home in Pangman.

The nine-year-old son of Dustin and Justina Pingert, the Grade 4 student first got the idea for this project last year, as he had made and sold blankets at Pangman’s Christmas bazaar in 2019.

He got a call from the care home as a resident there wanted a blanket, which he was glad to do, said his mom, Justina.

As he made this blanket, he told her, “Mom, I wish everyone at the care home could have one, cause everyone deserves to have a happy Christmas.”

For this year, Auric set a bigger goal and had a more ambitious plan, as he decided to make 25 full-sized blankets, and to sell them on Facebook, to finance the buying of the materials he needed for the lap blankets for the seniors home.

“He uses fleece material, and he cuts them into strips and ties them together,” explained Justina, who noted that when Auric held the sale on Facebook on Dec. 5, all 25 of his blankets sold in a matter of minutes.

He ended up doing about five more blankets from additional requests that came in to him, and “he told me he’s ready to relax,” said Justina.

“He was blown away,” said his mother of this amazing response from the Pangman community. “He didn’t know what to say. He couldn’t believe how fast they sold.”

Justina added that Auric also received a couple of calls from people, not to buy blankets but to donate funds towards buying the blanket materials, which also blew him away. “They heard what he was doing and they made donations.”

Auric was able to buy the materials he needed and with some help from his mom, he was able to make lap blankets for every one of the care home residents, about 15 altogether. The full-sized blankets measured about 50 by 60 inches, and the lap blankets were half that size, said Justina, noting that Auric could make two lap blankets at a time in just over an hour.

He not only made his goal, but had them done two days earlier than his initial of Dec. 10, the day when he delivered the blankets to the Deep South Care Home, presenting them to administrator Cacey Warren.

In a message from Justina on Thursday, she said, “All he said is that he hopes they really like their blankets.”

She added that Auric is “such a kind-hearted boy, and as parents we are really proud of him, and that he feels everybody deserves to be happy at Christmas. He’s always been a very caring and compassionate boy.”

She noted Auric has three brothers, one who’s a year older, and the other two are five and two years old.